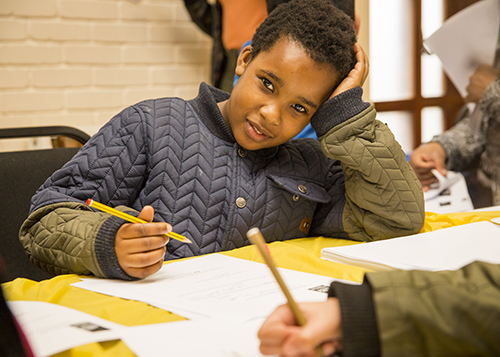 Kudzy can’t remember a time when he wasn’t at least partly responsible for his older brother, Kupa.

Kudzy is nine and known as a young carer. He helps his mum Molline care for Kupa, who has Down’s syndrome and severe autism.

Kudzy is wise beyond his years, saying that looking after Kupa ‘fills him with complete joy.’

Being mature for his age has its benefits but sometimes he needs a rest. He needs a childhood too.

Spurgeons Children’s Charity is there to support him and make sure he has the childhood he deserves.

He goes to Birmingham Young Carers, where he can be a child and spend time with other young carers who understand his situation. It also gives him time to relax, with activities including trips out, dancing and picnics.

It also helps keep his energy going so he can concentrate on more important things like looking after his brother. ‘It’s helped me to achieve things from the bottom to the top.’

Spurgeons runs a number of support services and interventions to help improve the lives of vulnerable and disadvantaged children and families and give them a more hope-filled future.